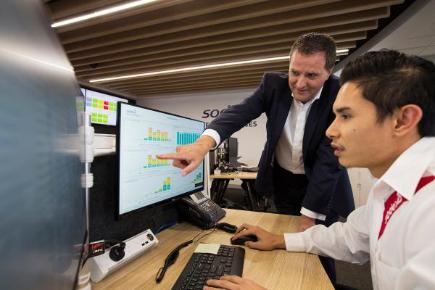 A seasoned international CEO with 20 years’ experience, Johnpaul Dimech began his tenure at Sodexo in 1998 in Australia.  With a proven track record of leading teams across cultures, he has held various C-suite positions in Singapore, India and Australia.He takes over from Aurélien Sonet, who will lead Sodexo’s Benefits & Rewards Services as Global CEO from the same date.

As the Managing Director of Sodexo Singapore from 2004 to 2006, Johnpaul developed Sodexo’s client portfolio in a wide spectrum of industries, providing food and facilities management services to healthcare institutions, multi-national corporations and international schools.  He was also the CEO of Sodexo India and led the acquisition of Radhakrishna Hospitality Services Group, a leading food and facilities management services company in India during his tenure from 2006 to 2009.  Most recently, under his leadership as the CEO of Mining Worldwide, Sodexo signed a ten-year integrated facilities management contract with a global mining client – the largest contract of its kind in Sodexo Group’s history.

“Sodexo set up its Asia Pacific footprint in 1982 in Singapore and our business here has grown in strategic importance. Today, it is the hub of our Asia Pacific operations, a dynamic region with great potential. As the new Region Chair, I am excited to build our future together with our 65,000 employees across 15 territories in this region.”

Sodexo has also appointed Paul Bean to be the CEO, Mining Worldwide, succeeding Johnpaul Dimech.  In his former position as Sodexo’s CEO Mining for Asia Pacific, Paul introduced and implemented industry leading technology that is now transforming integrated facilities management (IFM) in the mining industry. Using the safest and most cost-effective operating models with real-time intuitive data analysis, Sodexo will continue to invest in technology and new innovation as key enablers to improve the Quality of Life for clients and consumers across its wide range of services.

Throughout his career, Paul has led several large scale international businesses and joined Sodexo in 2014 to lead the mining business for Asia Pacific.

“I’ve had the privilege of working with Johnpaul Dimech for the past three years and it is an honour to succeed him in my new role. I look forward to leading our global mining team and growing Sodexo’s footprint with our current and future mining industry clients around the world.”

As Sodexo evolves its business for the digital age, both leaders will continue to improve quality of life for clients and consumers in their new positions.