Redefining teamwork on the move

This year the Tour de France celebrates its 100th anniversary. Since 1991, Sodexo teams have ensured and coordinated the considerable logistics involved in delivering Quality of Life Services on the move to 4,000 Tour de France participants. But as Sodexo teams prove annually, the Tour is not just a chance to prove organizational excellence in difficult circumstances. It’s also a thrilling team-working experience that is not soon forgotten.

Nuts and bolts planning for a smooth ride

Running from June 29th to July 21st, this year’s Tour de France covers a total distance of 3,479 km over 21 stages. But Sodexo teams will cover twice as much ground in their quest to ensure daily hospitality services for the thousands of Tour de France organizers, support staff, motorcyclists, drivers and VIP guests. The fact that this year’s Tour kicks off on the island of Corsica adds an extra logistical challenge. Nathalie Szabo, CEO of Sodexo Prestige, Sports and Leisure: “Sodexo’s strength lies in its ability to rise above the logistical challenges of the Tour de France, while offering exemplary culinary creations. We are proud to be the official foodservice provider of La Grande Boucle for the 22nd consecutive year.”

To handle these difficult conditions, Sodexo organizers start laying the groundwork in December: booking vehicles, recruiting employees, ordering uniforms and more. Menus are tasted and ordered by mid-May. By June, the 45 team members are raring to go. Divided into 4 teams which operate independently of each other, the Logistics, Starting Village, Mid-stage, and Finish Line teams are united only by the spirit of cooperation of each.
The Logistics team forms the backbone: 10 people including 8 drivers and 2 logistics experts organize every aspect of the operation. Twenty-one people make up the Starting Village team, which manages the hospitality at the starting line of each day’s race stage. That means getting up at 3am, getting to the site, setting up and preparing meals for VIP guests and partners attached to the Tour. The job of the 6-person Mid-stage team is to set up a complete sit-down restaurant every day. Situated at a spot around 50 to 60 km from the starting line, they are there from the morning until after all the cyclists have gone by. As for the Finish Line team, its 8 members create a lively cocktail party for Tour de France every evening at the end of the day’s race.

Pulling together and pitching in

Packing up and moving on to the next site to do it all over again the next day can be challenging, says Isabelle Langolf: “We don’t always know what type of conditions we’ll be greeted with in each village. Once we found ourselves at 4am, with no light for the set up. Luckily, two of the Tour members were early-morning joggers and lent us their headlamps!”

It’s this feeling of pulling together as a team, of everybody pitching in to solve problems and ensure things run smoothly that participants say make the Tour de France such a special occasion.“Every year I’m struck by the way the teams come together,” says Langolf. “The first day, everyone introduces themselves, the second day we’re already more comfortable together and as we advance along the Tour route I’m just amazed at how supportive everyone is. Even if we come from different companies – there’s real teamwork between all the partners. As soon as there’s a problem we help each other out. It really is a big family that takes to the road every day.” 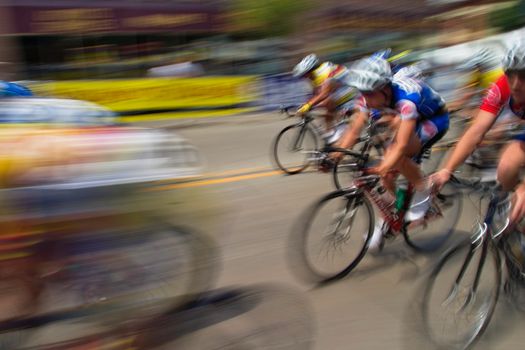