Bruno VAQUETTE, Country President of Sodexo China was invited to attend the conference and participated in the roundtable, discussing the topic of “What opportunities will China’s adjustment of its economic structures and driving forces bring for multinational corporations?”.

International Roundtable of Multinational Corporations’ Leaders (IRMCL), a splendid International event, gathering world leaders of corporations and government officers and initiating profound dialogues, was headed by China International Council for the Promotion of Multinational Corporations (CICPMC), co-organized by United Nations Development Programme, United Nations Conference on Trade and Development, United Nations Environmental Programme, etc. ZHENG Wantong, President of CICPMC and Chairman of Organizing Committee for IRMCL, Zhou Tienong, specially-invited President of CICPMC attended the conference, together with multinational diplomatic envoys to China, China chambers and associations, heads of related institutions for the investment promotion both at home and abroad, more than 200 senior leaders from multinational corporations on the Fortune Global 500 List, and entrepreneurs with high profile.

The 10th IRMCL focuses on the future development of multinational corporations. In the new era, where’s the opportunity for them? Where will they go? How the new goals should be set? Bruno VAQUETTE, Country President of Sodexo China, participated in the roundtable “What opportunities will China’s adjustment of its economic structures and driving forces bring for multinational corporations?” and gave his opinion on three dimensions, services economy, innovation and sustainable development. 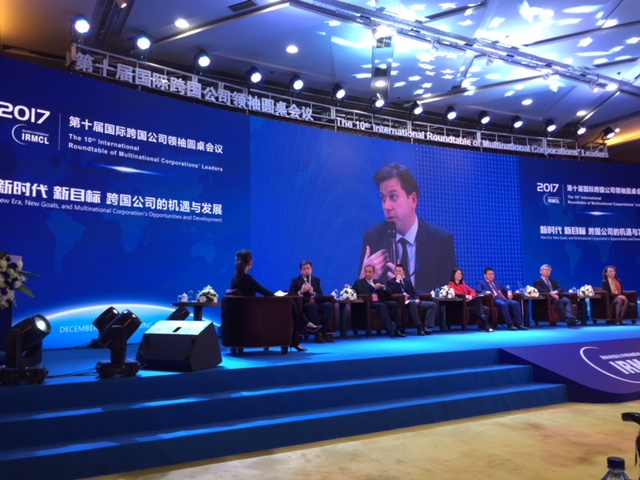 Bruno VAQUETTE, Country President of Sodexo China, participated in the roundtable“What opportunities will China’s adjustment of its economic structures and driving forces bring for multinational corporations?”

Bruno VAQUETTE mentioned China’s new economic model places a strong emphasis on shifting the balance of growth away from heavy-industrial investment and toward domestic consumption, particularly of services. Sodexo, as a service company, has been engaged in delivering Quality of Life services to clients and consumers. He said that “We are seeing more and better opportunities during the adjustment of China’s economic structures, because China now focuses on the quality rather than the quantity and we have received more supports for the tertiary industry from the country and the government.” Via outsourcing services, Sodexo, a people-oriented company with over 12,500 staff in China, greatly contributed to employment of labor with low entry level on professional skills and provides professional training for them.

Enhancing innovation, as a means of raising productivity and climbing up the global value chain, has becoming a key driving force for the country and the company. The innovation culture has been embedded in Sodexo’s DNA and through every detail Sodexo presents. In an economic environment fostering innovation, the company would be better to leverage innovation strength globally to raise productivity, enhance client and consumers’ Quality of Life services experience, and better contribute to the glocal environment.

Sodexo values sustainable development, emphasizing reductions in air pollution and is committed to reduce carbon emissions by 34% till 2020 though reducing food waste, increasing deployment of energy efficiency interventions. Bruno VAQUETTE mentioned “We integrate sustainability into our integrated facility services, which help the clients to achieve their goals both economically and environmentally; also, help our suppliers to be more environment-friendly and developing sustainably.”